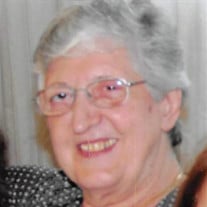 Vera Vujosevich, born in Berane, Montenegro on July 10, 1932, passed peacefully on September 14, 2016 with Ilija and Lois Djurisic and Linda Goodman in attendance. She was born to the successful merchant family of Vlado and Stana Vujosevich. She lived as a happy child, raised very Orthodox in God's love, until the unfortunate times of war and the Fascist and Communist occupations. Her family's extensive property and holdings were confiscated and the family was sent to prisons and concentration camps. Through the inner conviction to survive, her older sister Mila Vujosevich (Popovich) led the family's escape from the concentration camp and certain death. They were particularly targeted because Stana was the sister of Pavle Djurisic. They spent a year walking through central Bosnia, as they were in escape, where their father and brother, Vlado and Bato, died due to horrible conditions. After spending her teen years in Logors (camps) and after the loss of many family members due to war an illnesses, Vera and Stana came to Chicago in 1950 when she was 18 years old. She took any jobs she could. One day she was offered to be one of the first to work on IBM machines. She then knew she was destined to be a successful business woman. She became a highly respected member of Union Specials. A woman ahead of her time. Vera never forgot the importance of God, Orthodox faith, family and friends. She read her Bible daily and always tried to help her family and friends here in the US and in Montenegro and Serbia. She was a devoted sister to the late Mila, Vuko, Sonja, Bato, and Lidija. Charity and a passion about children's needs is what drove her. She was a strict business woman with a kind heart for family and many friends. She will be sorely missed. She is survived by Ilija and Lois Djurisic, their sons Pavle and Marko and their families, Linda and Robert Goodman and their children Able and Worthy. She too will be greatly missed by numerous nieces and nephews and their families; Branko, Branka and Ranko Popovich; Linda and Tomislav Stamenkovich and their families; our beloved cousins, Kumovi and friends in Montenegro and Serbia; the Popovich, Vujosevich and Zechevich families of Berane. Having no children of her own and having a sweet tooth herself, she was a devoted aunt and great-aunt to her many nieces and nephews, who always were given a box of candy for any reason or occasion. She has more friends than we can count. May her memory be eternal .

Vera Vujosevich, born in Berane, Montenegro on July 10, 1932, passed peacefully on September 14, 2016 with Ilija and Lois Djurisic and Linda Goodman in attendance. She was born to the successful merchant family of Vlado and Stana Vujosevich.... View Obituary & Service Information

The family of Ms. Vera Vujosevich created this Life Tributes page to make it easy to share your memories.

Send flowers to the Vujosevich family.