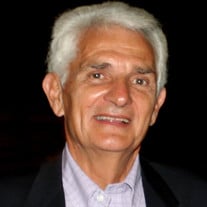 Svetomir, Steve, "Bata" Zunjic died peacefully, surrounded by his family, on February, 13th in Chicago, IL at the age of 78. He was born in Belgrade, Serbia. Beloved son of the late Milan and Jelena, dear husband for 45 years of Bosa, loving father of Ana (Ivan) Budisin, Mileva (Guillermo) Trias, and Milan Zunjic, proud grandfather of Pavle Budisin, Valentina and Oliver Trias. He lived a rich and fulfilling life. His early years were marked by the trials of WWII and escape from Yugoslavia to reunite with his father, who was released from a German camp. After 2 years in Austria, the family immigrated to the US in 1950 and settled in Chicago. Upon graduation from High School, he served in the US Military for 3 years, where he was stationed in Germany. This gave him the opportunity to practice his German and his skiing. Upon his return, he attended the University of Illinois, where he graduated with a degree in Electrical Engineering. He took a job with Commonwealth Edison where he worked for 28 years. He married his wife Bosa in 1973 and soon after had 3 wonderful children. He was a dedicated father imparting on his children his curiosity and passion for life - his love of the outdoors, sports, poetry, chess, reading, travel and renovating. He was always actively involved in supporting people that came from other countries throughout his life, due to all of the support he and his family received as refugees. He was an active member of the Chicago Serbian community and various organizations. He was blessed to be able to retire at the age of 55, which enabled him to pursue his passions and spend time at his family’s farm in Delavan, Wisconsin, as well as to travel frequently to Serbia and Bosnia to visit with family and friends. Although he was an only child, he had many life long friends that were like siblings to him, many of whom he has known for 60+ years. He will be deeply missed by his loving family, the Budisin and Trias families, numerous cousins, dear kumovi and friends. The Funeral Service for Svetomir will be 11:00 am Saturday, February 18 at New Gracanica Serbian Orthodox Monastery, Third Lake. Interment at New Gracanica Cemetery. Visitation will be 5:00 pm until 9:00 pm Friday at Muzyka & Son Funeral Home, 5776 W. Lawrence Ave. with a Pomen (Wake Service) at 7:00 pm. For more information, please call (773) 545-3800.

Svetomir, Steve, "Bata" Zunjic died peacefully, surrounded by his family, on February, 13th in Chicago, IL at the age of 78. He was born in Belgrade, Serbia. Beloved son of the late Milan and Jelena, dear husband for 45 years of Bosa, loving... View Obituary & Service Information

The family of Mr. Svetomir (Steve) Zunjic created this Life Tributes page to make it easy to share your memories.

Send flowers to the Zunjic family.