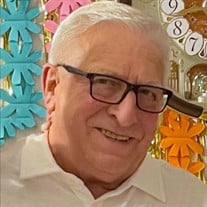 Roman Vasyl Sklepovyy, 72, passed away December 21, 2021 due to complications after a sudden open-heart surgery. Roman was born in Pidpechery, Ukraine on October 10, 1949. After graduating high school, Roman was called to serve in Soviet army where he was sent to Afghanistan. As luck should have it, Roman returned home in one piece and proceeded to study and graduate Ivano-Frankivsk State Pedagogical Institute and later Trade and Economy College. Then, he built an outstanding career in trade and commerce, providing his family with the best of everything during the difficult political times in the country. In 1997, Roman relocated to the US in search of a better life and bigger opportunities. Here, he became a truck driver with an impeccable record for over 20 years. But if you asked Roman, his greatest accomplishment wasn’t his huge trade and commerce career or two-decade long successful truck driving. It was being a loving partner, devoted father, doting grandfather, and a caring friend. He loved with all his heart and was generous to a fault, to everyone. Roman never new a stranger and would give his last shirt to someone in need. He also loved to cook and feed people, throwing all kinds of feasts on a regular basis, all the while playing his accordion and singing love ballads and humor rhymes. Everyone who ever met Roman knew he had a huge heart, though a faulty one as it turned out. Right before the surgery, he did say that he was truly scared only twice in the 72 years of his life – the first time when he was sent to fight in Afgan war and the second time when the doctor dropped the news that he urgently needed to have an open-heart surgery. Though the doctors said he had much better chance of surviving the surgery than the war, he was called to Heaven five days after the procedure. Roman loved fiercely and gave his all to his family and friends. He is survived by his sister Miroslava, daughter Tatiana, son Pavel, daughter Roxolana, son Rouslan, and numerous grandchildren and countless extended family and found family members. All held him in the highest regard and loved him dearly. Join Roman’s family for viewing and farewell service on Sunday, 26th of December, 2021 from 4 p.m. to 7 p.m. at Muzyka & Son Funeral Home (5776 W. Lawrence Ave., Chicago) with a religious reading of Panachyda (Wake Service) at 6 p.m. Some delicious food will be served in the funeral home's cafeteria, in loving memory of the dearest foodie Roman Vasyl. A private Funeral Service will take place the following day at the St. Andrew Ukrainian Orthodox Cathedral, 300 E. Army Trail Rd., Bloomingdale, IL. Interment will follow at St. Andrew Ukrainian Orthodox Cemetery. In lieu of flowers and those wishing to honor Roman’s lifelong commitment to family and community, can make donations to the “Go Fund Me” account, organized to help the family with the unexpected expenses: https://www.gofundme.com/f/funeral-service-for-roman-skepovyy?utm?campaign=p?cf+share-flow-1&utm?medium=copy?link&utm?source=customer&fbclid=IwAR2?Ysn0zs2LGPO06wr8WcLC2L52nRg8yI9b30zNqPQxliDjVDXwqjiXUHU For more information, please call (773) 545-3800.

Roman Vasyl Sklepovyy, 72, passed away December 21, 2021 due to complications after a sudden open-heart surgery. Roman was born in Pidpechery, Ukraine on October 10, 1949. After graduating high school, Roman was called to serve in Soviet army... View Obituary & Service Information

The family of Roman Vasyl Sklepovyi created this Life Tributes page to make it easy to share your memories.

Send flowers to the Sklepovyi family.