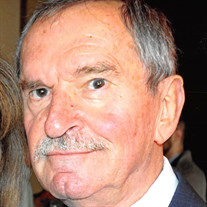 Ray (Ratko) Jovanovich, age 77, of Chicago, passed away Wednesday evening, July 17, 2019. Beloved husband of Lillian; loving father of Sonja and Donna (Steve) Cirjakovic; cherished grandfather of Petar and Alek; dear brother of Vinka (the late Uros) Filipovic and Jelena (the late Miodrag) Novakovic; fond uncle to Ilinka, Aca, Milijana, Rade, and Milan. He will be missed by many family, Kumovi, and friends in the United States and in Serbia, Bosnia and Herzegovina. Ray Jovanovich was born in Crni Vrh, Bosna in 1941 to Danilo and Mileva Jovanovic. After WWII, Danilo emigrated to America. Years later, at the age of 15, Ray left Bosna to join his father, who was waiting for him in Chicago. After completing high school, he continued his studies at the University of Illinois where he earned a degree in Electrical Engineering. He was self-motivated, hardworking and dedicated to completing his education. After graduation, he accepted a position at Commonwealth Edison and remained with the company for 30 years. In 1965, Ray met his future wife, Lillian. They fell in love and married in 1966 and were blessed with two daughters, Sonja and Donna. Their loving marriage lasted 52 years. Ray was a devoted family man and maintained a close and loving relationship with his sisters, Vinka and Jelena, their husbands, +Uros and +Miodrag, and his five nieces and nephews and their families. He was instrumental in bringing both families to the United States and guided them as they adjusted to their new life in this country. His commitment to his family was one of his greatest attributes. For decades, Ray was a dedicated church member of St. Stevan of Decani. He spent countless hours volunteering in the church office. He took great pride in supporting his church and loved spending his free time with his Serbian Orthodox brothers and sisters. Ray retired from Commonwealth Edison at the age of 55. After retirement, he enjoyed working with his son-in-law, Steve, whom he adored as a son. He relished in the time that he spent with his grandsons, Petar and Alek, which included weekend sleepovers at Baba and Deda’s house filled with nature walks in the neighborhood or at the Botanical Gardens. Ray was an avid traveler and enjoyed yearly beachfront vacations with his wife Lillian. Joyous occasions, such as Christmas and Easter, were spent every year with his extended Cirjakovic family which included Mika, Lela, and +Milica, whom he deeply loved and respected. One of his greatest passions was his garden. He took great pride in maintaining his yard and loved sitting under his canopy of grapevines on a hot summer’s day. Every summer, for almost 5 decades, he planted and nurtured his vegetable garden which included several rows of his famous tomatoes, and other vegetables, which he loved to share with everyone. Ray was greatly loved and respected by his family, Kumovi, friends and neighbors. He was an inspiration to many and will be deeply missed. Family and friends to meet Saturday, July 20, 2019 at New Gracanica Serbian Orthodox Monastery, 35240 W. Grant Ave., Third Lake, for Opelo (Funeral Service) at 1 p.m. Interment New Gracanica Cemetery. In lieu of flowers, donations to the American Cancer Society, https://donate3.cancer.org/. Arrangements entrusted to Muzyka & Son Funeral Home. For more info, please call (773) 545-3800.

The family of Mr. Ray Jovanovich created this Life Tributes page to make it easy to share your memories.

Send flowers to the Jovanovich family.