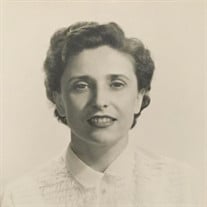 Dr. Myroslawa Iwanciw was born on the 13th of February 1919, in the village of Vynnyky, just east of Lviw then within the Second Polish Republic, now part of Ukraine. Myroslawa began her education in the Vynnyky village school which was taught in the Polish language. At the age of 10, she transferred to a private school in Lviw run by nuns of the Basilian Monastery of St. Onophrius. She finished her secondary education in 1938, after which she moved to Warsaw to continue her studies and become an active member of a local Ukrainian nationalist organization. Upon the outbreak of the Second World War in 1939, Myroslawa was imprisoned for her nationalist activities and spent a month in solitary confinement. Upon release she moved to Kraków and shortly thereafter to Berlin to continue her studies at university. She subsequently transferred to Wrocław, then called Breslau, obtaining her degree in dentistry in 1944. She began work as a dentist in Vienna. As the Soviet army advanced, Myroslawa fled to the Munich region where she worked as a dentist caring for people displaced by the war. There, she reunited with her mother and sister who were also escaping the Soviet advance. Together they moved to the displaced persons camps near Regensburg where she met her future husband. She married Ivan Iwanciw in 1948. Together they moved to Heidelberg to study at the local university, where Ivan continued his medical studies, and Myroslawa advanced her dental education obtaining her PhD in 1950. Myroslawa emigrated to America with her family, passing through Ellis Island and settling in Chicago. She began her life in America as a factory worker, but quickly advanced to an office position. At that time America did not recognize diplomas from foreign universities and would not permit her to practice dentistry. Her repeated efforts to do so resulted in frustration. During her early years in America, she retained a great fondness for her homeland and held a strong desire to return. She and her husband returned to Western Europe where he was stationed as a young physician in the American army. At the end of Ivan’s tour of duty, the two returned to America where they lived in the Chicago area. Between 1968 and 1993 Myroslawa and Ivan took numerous trips to Soviet Ukraine, doing their best to help family members trapped behind the Iron Curtain and support many young Ukrainian scientists and artists. They lived an active life in the Ukrainian community in Chicago. Myroslawa‘s mother passed away in 1981 followed soon after by the untimely death of her husband. This had a devastating effect on her, and she mourned their passing for many years. She continued to live in the family home for the next forty years, where she passed away peacefully on the morning of Thursday, January 14th, one month short of her 102nd birthday. Myroslawa was a strong supporter and consistent donor to numerous Ukrainian charitable organizations. She sponsored the studies of many young Ukrainians both here in the United States and at the Kyiv-Mohyla Academy in Kyiv, Ukraine. She and her husband were founding members of the Canadian Institute of Ukrainian Studies (CIUS) at the University of Alberta in Canada where they established an endowment fund. She is survived by her nephew, Myron Pozniak, and her great-niece and nephew, Alexandra Pozniak, and Julian Pozniak. She will be missed dearly by her family, her god-daughter Christine Dudiak, and her recent care givers Anna Nagirniak, Luba Matkivska and Anna Zenenetz. In lieu of flowers, donations can be sent to the ‘Dr. Ivan Iwanciw and Dr. Myroslawa Mysko Iwanciw Endowment’. The Canadian Institute of Ukrainian Studies, 450 Athabasce Hall, University of Alberta, Edmonton, AB, Canada T6G 2 E8. Graveside service and Interment 12 p.m. January 29, 2021 at St. Nicholas Cemetery, Chicago, IL.

Dr. Myroslawa Iwanciw was born on the 13th of February 1919, in the village of Vynnyky, just east of Lviw then within the Second Polish Republic, now part of Ukraine. Myroslawa began her education in the Vynnyky village school which was taught... View Obituary & Service Information

The family of Myroslawa Iwanciw created this Life Tributes page to make it easy to share your memories.