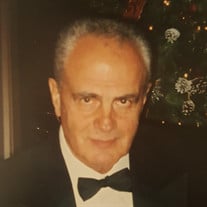 Milovan was born Trebinje, Bosnia-Hercegovnia in 1940. He, his parents, Jovica and Mila Jaksic and his three siblings, Pera, Jovanka, Jovo moved to Topolovac, Serbia in 1945, post World War II. He grew up with a love of sports, friends and cultural experiences, especially in Belgrade, Serbia. Milovan followed his passion for sports and eventually played professional team handball for Red Star Club Team and represented his country of Yugloslavia on the National Team. After meeting and marrying his then wife Branislava Jaksic (Misic), he immigrated to the US in 1966, along with his in-laws, who had arrived in years prior. He resided in Evanston, IL and this is where their two children were born and raised. Milovan was a hard working, devoted father and husband. After spending sometime playing for the Chicago Mustangs Club Soccer Team, he began working at MCC Powers in Skokie, IL. His devotion and love was quite apparent when he saw his wife pass away in 1982. Through this tragedy, he cared for his family and helped them move forward with much needed strength and guidance. In 1989, he married Dr. Luba Babich, MD. Together, they loved and comforted each other, and cherished many wonderful times together. After nearly 40 years, he retired as a production analyst for Siemens in Deerfield, IL. He loved his children and grandchildren immensely. Milovan enjoyed staying physically active and traveling, especially to his favorite place, Longboat Key, FL every year. Most of all, he made sure to be the helpful, giving and caring force for his family, near and far. Through thick and thin, Milovan was always there for his family and never waivered on being the rock that was needed. Milovan passed away on December 4, 2017, with his devoted children and grandchildren near. He is survived by his son Vladimir Jaksic and daughter Katarina Jaksic-Mirtchev (Luben Mirtchev); stepdaughter Myrna Begnel (Steve Schommer), stepdaughter Linda Perry (Joe Perry), four step-grandchildren and four beautiful grandchildren Filip Jaksic, Andrea Jaksic, Kaloyan Mirtchev and Jovana Mirtchev. The family would like to extend heartfelt gratitude to the staff of North Shore Evanston Hospital, Dr. Lynne Kaminer, MD, and Dr. Richard Larson, MD of the University of Chicago Hopsital. A special thanks goes to all the nurses and technicians at the Kellogg Cancer Center in Evanston. You care and kindness was warmly received and greatly appreciated. Memorial Visitation will be Saturday, December 9th from 2-5 p.m. at Muzyka & Son Funeral Home, 5776 W. Lawrence Ave. with a Time of Sharing to begin at 4:00 p.m. Interment Private. In lieu of memorials, please honor Milovan's life in your own way. For more information, please call (773) 545-3800, or visit www.muzykafuneralhome.com

Milovan was born Trebinje, Bosnia-Hercegovnia in 1940. He, his parents, Jovica and Mila Jaksic and his three siblings, Pera, Jovanka, Jovo moved to Topolovac, Serbia in 1945, post World War II. He grew up with a love of sports, friends and... View Obituary & Service Information

The family of Mr. Milovan Jaksic created this Life Tributes page to make it easy to share your memories.

Milovan was born Trebinje, Bosnia-Hercegovnia in 1940. He, his...

Send flowers to the Jaksic family.