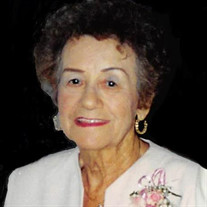 Mildred J. Foslund, 100, of Columbia, Missouri and formerly of Clearwater, Florida, died on Monday, July 4, 2016 at The Arbors of Colony Pointe. Visitation will be on Monday, July 11, 2016, from 9:00 am to 11:00 am at Muzyka & Son Funeral Home in Chicago, Illinois, followed immediately by the funeral services at 11:00 am at the funeral home and the interment at Acacia Park Cemetery in Chicago, Illinois. Mildred Foslund was born on July 29, 1915 to John Palla and Elizabeth Zavodny in Chicago, Illinois. She married Erwin A. Foslund on August 17, 1940 in Chicago, Illinois. After her marriage she lived in Glenview, Illinois, where Erwin owned and operated Harrison Poultry Farm with two business partners. Mildred was a community volunteer, a member of the GFWC Glenview Women’s Club, and an avid golfer. After Erwin’s retirement in 1973, they moved to Clearwater, Florida and also spent time at their home in Franklin, North Carolina. In 2005, they moved to Columbia, Missouri to be closer to family. Mildred was a member of the Missouri United Methodist Church. Survivors include her daughter, Barbara and husband Bill Johnson of Columbia, Missouri; grandchildren, Mark Johnson and wife Jenika of Millersburg, Missouri, and Suzanne Johnson of Chicago, Illinois; and four great-grandchildren. Erwin preceded her in death on August 14, 2011. She was also preceded in death by her two brothers and three sisters. Memorial contributions may be given to Missouri United Methodist Church, 204 S. Ninth Street, Columbia, Missouri 65201. Condolences may be sent to the family at www. muzykafuneralhome.com.

The family of Ms. Mildred Foslund created this Life Tributes page to make it easy to share your memories.

Mildred J. Foslund, 100, of Columbia, Missouri and formerly of...

Send flowers to the Foslund family.