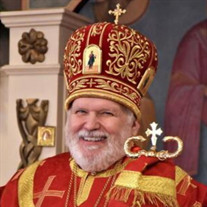 On the Feast of Feasts, Great and Holy Pascha, Sunday, April 24, 2022, His Eminence, the Most Reverend Paul (Gassios), Archbishop of Chicago and the Midwest, fell asleep in the Lord at the age of 69 after a grave illness. He was the ruling hierarch of the Diocese of the Midwest of the Orthodox Church in America from 2014 until his repose. Paul Nicholas Gassios was born in Detroit, Michigan on April 6, 1953 to Nicholas and Georgia Gassios, natives of Castanea, Greece. As an infant, he was baptized with the name Apostolos, in honor of the holy Apostle Paul, at Saints Constantine and Helen Greek Orthodox Church, Detroit, MI - his home parish for the first 28 years of his life. He graduated from Detroit’s Cooley High School in 1971, where he was a member of the National Honor Society, after which he enrolled at Wayne State University (WSU) as a history and psychology major. After graduating in 1976, he worked with emotionally and physically abused children. He received a Master of Social Work degree from WSU in 1980, and continued to work in his chosen field. In the mid-1980s, he became a member of Holy Transfiguration Church, Livonia, MI. He began theological studies in September 1991 at Saint Vladimir’s Orthodox Theological Seminary, Yonkers, NY, from which he received his Master of Divinity degree summa cum laude and served as valedictorian in 1994. He was ordained to the priesthood by His Eminence, the late Archbishop Job of Chicago and the Midwest, on June 25, 1994. After ordination, he was assigned Priest-in-Charge of Saint Thomas the Apostle Church, Kokomo, IN, which he served until June 2005, after which he resided at Saint Gregory Palamas Monastery, Hayesville, OH until May 2006. He briefly served as Rector of Archangel Michael Church, St. Louis, MO and the Nativity of the Holy Virgin Church, Desloge, MO before his transfer to the OCA’s Bulgarian Diocese and assignment as Dean of Saint George Cathedral, Rossford, OH in 2007. In August 2014, he was named Administrator of the Diocese of the Midwest and relocated to Chicago. On October 20, 2014, he was tonsured to monastic rank with the name Paul, in honor of Saint Paul the Confessor, Patriarch of Constantinople. On October 21, 2014, the Holy Synod elected him to fill the vacant Episcopal See of Chicago and the Diocese of the Midwest. Archimandrite Paul was consecrated to the Episcopacy and enthroned as Bishop of Chicago and the Midwest at Chicago’s historic Holy Trinity Cathedral on Saturday, December 27, 2014. Concelebrating at the Consecration Liturgy were His Beatitude Metropolitan Tikhon; His Eminence Archbishop Nathaniel of Detroit and the Romanian Episcopate; His Eminence Archbishop Benjamin of San Francisco and the West; His Eminence Archbishop Melchisedek of Pittsburgh and Western Pennsylvania; His Eminence Archbishop Nicolae of the Romanian Orthodox Archdiocese in the Americas; His Grace Bishop Irénée of Ottawa and Canada; His Grace Bishop Michael of New York and New Jersey; His Grace Bishop Alexander of Toledo and the Bulgarian Diocese; and His Grace Bishop David of Sitka and Alaska. On Thursday, May 28, 2020, he was elevated to the rank of Archbishop. His archpastoral tenure in the Midwest was only seven years but filled with great progress and accomplishment for the diocese. From an administrative perspective, he was known for prompt replies and calls when his clergy contacted him. He was very organized and thoroughly followed the established procedures with attentiveness. He actively attended diocesan, deanery, and parish meetings guiding the progress of the discussed topics. He established new ministries within the diocese that focused on building up the communities within the diocese which include: the Mother Maria of Paris Ministry – Department of Charitable Efforts, Department of Family Life, Saint Andrew of Crete Music Ministry, and the Department of Youth. These were four areas he saw to be important pillars to building up the Body of Christ. With a prioritization of pastoral visits, he was often on the road traveling each weekend to visit a different community within his vast diocese. He often reflected that this was the most enjoyable part of his ministry and gave him something to look forward to each week. In addition to leading the services when making archpastoral visits, he would make time to be with clergy and their families to hear about their life and struggles. He would gather with youth and parish councils to lead discussions on the faith and other topics of interest. He made annual visits to the seminaries to visit with the diocesan seminarians and their families and actively encouraged vocation within his parishes. His genuineness is unforgettable, and his smile brought joy to those around him. His sermons were impactful and memorable for those who were blessed to hear them. He is fondly remembered throughout the diocese as a loving shepherd for his flock. The schedule of services for Archbishop Paul is as follows: Bright Tuesday, April 26 Holy Trinity Cathedral, Chicago, IL 11:30 AM Arrival of Archbishop Paul 11:45 AM Panikhida 5:00 PM Gathering with Metropolitan Tikhon and Bishop Daniel with Clergy (parish hall) 12:00 PM – 6:00 PM Visitation 6:00 PM Funeral Service Serving clergy are asked to bring white vestments and will vest in the lower level of the rectory building. Bright Wednesday, April 27: Holy Trinity Cathedral, Chicago, IL 9:00 AM Hierarchical Divine Liturgy followed by memorial banquet Serving clergy are asked to bring white vestments and will vest in the lower level of the rectory building. Archbishop Paul is transferred to Holy Transfiguration Church, Livonia, MI 7:00 PM Panikhida Bright Thursday, April 28: Holy Transfiguration Church, Livonia, MI 9:00 AM Hierarchical Liturgy followed by memorial luncheon Archbishop Paul is transferred to Holy Dormition Monastery, Rives Junction, MI 4:00 PM – 5:00 PM Interment at Holy Dormition Monastery Cemetery May Archbishop Paul’s memory be eternal!

On the Feast of Feasts, Great and Holy Pascha, Sunday, April 24, 2022, His Eminence, the Most Reverend Paul (Gassios), Archbishop of Chicago and the Midwest, fell asleep in the Lord at the age of 69 after a grave illness. He was the ruling... View Obituary & Service Information

The family of His Eminence Archbishop Paul (Gassios) created this Life Tributes page to make it easy to share your memories.

On the Feast of Feasts, Great and Holy Pascha, Sunday, April...

Share and view memories of His Eminence Archbishop Paul...