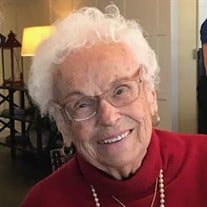 Helen Allex Nogulich, age 97, passed away June 27, 2020. Beloved wife of Walter Nogulich; dearest mother of Daniella (Bobby) Gomez, Natalija Nogulich and Christ Nogulich; loving grandmother of Nicolaus and Lexie Nogulich; precious daughter of +Jake Allex and +Velinka Mandusich; sister of +Alexander Mandusich; beloved daughter-in-law of +Christ and +Sofia Nogulich; sister-in-law of Dorothy (Pete) Bolan and Bob (Louise) Nogulich and Penny Mandusich; cherished Nana of Jasmina, Aleksandra and Milan Mandusich; dearest Kumovi with Eva Nickolich, Mile Savich, Jean Nachich, Dan and Olga Jordan, Mike and Mary Splecivich and the Pavlica family; dear aunt to Kim Simic, +Mark Bolan, Tammy (George) Goff, Justin (Gail) Hawk, Pamela (George) Leventis, Caliope (Nikko) Dallas, Van Nomikos and Sava (Jorda) Mandusich. Helen was born in Sredska, Serbia in 1923 and emigrated to the U.S. in 1941. She attended night school to learn English and worked in a war plant until she met her husband after World War II. They married in 1947, had three children and have been together 72 years. She was very active in the Serbian Orthodox Church community, the couple founded St. Steven of Decani in 1963 and Helen served as President of the Women’s Circle of Sisters, while her husband served as President of the church. Among her many gifts was knitting and crocheting, and she donated dozens of hats and scarves every year to the orphans in Belgrade who suffered during the Balkan wars of the 1990’s. Visitation from 5-9 p.m. with a Pomen (Prayer Service) at 7 p.m. on Tuesday, June 30, 2020 at Muzyka & Son Funeral Home, 5776 W. Lawrence Avenue, Chicago, IL 60630. A Funeral Service will be held at 10 a.m. on Wednesday at St. Steven of Decani Serbian Orthodox Church, 3543 W. Leland Avenue, Chicago, IL 60625. Interment at Montrose Cemetery in Chicago. For information – 773-545-3800 or www.MuzykaFuneralHome.com. Memorial contributions in Helen’s name may be made to St. Steven of Decani Serbian Orthodox Church.

The family of Helen Allex Nogulich created this Life Tributes page to make it easy to share your memories.

Send flowers to the Nogulich family.