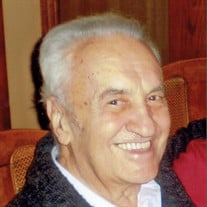 George J. Kovac, age 90, of Chicago, passed away Friday, May 11, 2018. Cherished uncle of Sally Bray (Nick Rallis), Sandra (Van) Pavlakis, John (Renee), Adam, and the late Chris Kovac; Beloved "Ciko" of Steven (Alyssa), Adam and Luka Pavlakis and Matthew, Rachel and Christopher Kovac; Dearest Kum of Paula (Eli) Potkonjak, Mary Franzella and the Voynovich and Rupic families; Treasured son of the late Jovo and Sava (Rupic) Kovac and loving brother of the late Risto (Milena) Kovac and the late Bessie Bray. George enlisted in the U.S. Marine Corps during WWII upon his graduation from Lane Tech High School and spent his active duty overseas. Upon his honorable discharge, he returned home and became a proud member of the Chicago Police Department. The majority of his career was spent as a patrol and tactical officer in the 12th Police District. In the latter part of his career he was assigned to O'Hare Airport where his duties included greeting and escorting many celebrities and dignitaries. While working at the airport, he earned the nickname "The Mayor of O'Hare" since everyone knew and loved him. Upon retirement from the CPD in 1990, he joined the security force at Wright Jr. College in Chicago and remained there for 17 years. As a devout member of Holy Resurrection Serbian Orthodox Cathedral for many years, George was seen every week engaging in his duties as a "tutor." He was a past member of the Branko Radicevich Choir, the HRSOC Men's Club, a lifelong member of the United Serbian Society (Jedinstvo) and a member of the Serb National Federation. Additionally, he was a member of the American Legion Post #0207, the Shriners, the Masons Old Glory Lodge #141, and the Fraternal Order of Police Lodge #7 (FOP) where he served as a delegate for many years. "Uncle George" as he was fondly known by many was a giant of a man with a heart of gold. His kindness and generosity earned him a legion of friends wherever he went. He will be missed by us all. Resting Friday, at Muzyka and Son Funeral Home, 5776 W. Lawrence Ave. from 4:00 pm. until 9:00 p.m. with Pomen (Wake Service) at 7:00 p.m. Funeral Service Saturday 10:00 am at Holy Resurrection Serbian Orthodox Cathedral, 5701 N. Redwood Dr. Interment Montrose Cemetery. In lieu of flowers, donations in his name may be made to either the Branko Radicevich Serbian Orthodox Choir or the Bishop Nikolai Velimirovic Serbian Orthodox Choir. For more information please contact 773-545-3800.

The family of Mr. George J. Kovac created this Life Tributes page to make it easy to share your memories.

Send flowers to the Kovac family.