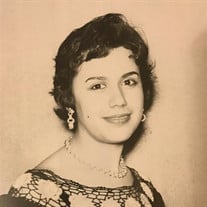 Estela Bracamontes was born November 8th in the year 1939, in the small town of Arroyo Seco de Arriba near the city of Jerez, Zacatecas. She was the oldest of 4 children. In 1954, at the age of 15, she moved with her family to Nuevo Laredo Tamaulipas, Mexico. Next her mother Angela crossed the border North to look for a better life for her children. She left Estela to care for her three younger siblings, by herself, for the next two years. To make enough money, she left school and worked various jobs around town. Her employers at the local bakery were very kind helped her get through those years taking care of her siblings. She always remembered her struggle and their kindness. In September of 1956, Angie sent for everyone and the family moved to Chicago. There Estela was reacquainted Everardo Bracamontes, someone from her hometown. They married a few years later, moved in with Angela and her children, and lived on Flourney and Independence. By summer 1969, Estela and husband Everardo were raising two children and expecting another while renting an apartment on the 24th Street Boulevard. She worked at factories and grocery stores, while her husband worked at a tool and die factory. She took night courses to study floral arrangement and received her certificate in 1974. The couple decided to purchase a building and open their own grocery store on 24th place called “Estela’s”. Many senior citizens lived in the area and were on a fixed income. She realized that many of them needed help, so she opened lines of credit for seniors and other people in need. Because of her compassion, she was loved by many and was asked to baptize many, many children over the next decade. In 1981, she gave birth to another son, the baby, some would say the favorite. By this time a second grocery store, “La Primavera” was opened and she ran them both. This put her kids through college. Estela was kind, generous, selfless, full of joy and laughter even through the toughest of times. She regularly collected old clothes and shoes from family and friends to distribute to families in need in Mexico. Over the years she sent hundreds of Army size duffle bags, helping many families in her home state of Zacatecas. Her ability to make friends in any situation was impressive. She was the first to make everyone feel welcome. She did not see status or money. She treated everyone as equals. She was always a pleasure to be around, never one to complain, always the peacemaker. She could brighten your day with just a few words and a smile. Her love for sweets was well known, pastries, candies, cakes, cookies, even a tortilla filled with sugar. She is survived by her children Blanca, Everardo, Linda, Jose; her grandchildren Josie, Gian, Yvette, Erik, Kirk, Natalie, Sonny, and Ella and great grand children, Jessiah, Joshua, Josefina, Naomi, Curtis, Yvianna, Julissa, Ylena, Brooklyn; her siblings Leticia, Esperanza, Luis and Jose. Her infectious laugh can still be heard throughout every Bracamontes household. We will miss her dearly.

Estela Bracamontes was born November 8th in the year 1939, in the small town of Arroyo Seco de Arriba near the city of Jerez, Zacatecas. She was the oldest of 4 children. In 1954, at the age of 15, she moved with her family to Nuevo Laredo... View Obituary & Service Information

The family of Mrs. Estela Bracamontes created this Life Tributes page to make it easy to share your memories.

Estela Bracamontes was born November 8th in the year 1939, in...

Send flowers to the Bracamontes family.