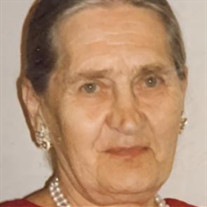 Edwarda Kulesz of Chicago, IL died at 6:15 am on January 22, 2022 at Northwest Memorial hospital in Chicago. Funeral services will be 11:30 a.m. Friday, January 28, 2022 at St Constance Catholic Church with the Fr. Robert officiating. Burial will follow in Maryhill Cemetery. Visitation will be Thursday from 4:00 until 8:00 p.m. with the wake service at 5:30 p.m. at the funeral home. A native of Horodnianka, Poland she was born on September 15, 1925 to Aleksandra Hiero (Stupak) and Teofil Hiero. She was the fourth of six children. Edwarda was a dedicated and loving wife and mother. She worked very hard on the farm while she raised her children. She was deeply faithful to her Catholic faith and she raised her children in faith. After she emigrated to USA she worked for awhile and helped with her grandchildren. Her grandchildren remember her as a fun babcia with a young and playful spirit. After retirement she dedicated herself to her beloved hobbies: gardening, painting, traveling and cooking. She was proceeded in death by her husband Waclaw, her brother Franciszek, her sisters Maria, Waleria and Hanna and her grandson Erick. Survivors include her sister Leokadia Liszewska of Kalinowo, Poland, her children Wanda Gres of Medinah, IL, Jozef Kulesz of Chicago, IL, Henry Kulesz of Chicago, IL, Marian Kulesz of Chicago, IL, Bernard Kulesz of Chicago, IL and Ewa Kulesz of Rolling Meadows, IL, her grandchildren Elizabeth Gres-DeMay, Alice Gres, Mark Gres, Christopher Gres, Andrew Gres, Oran Kulesz, Krystyna Zumski and Julia Zumski, and her great-grandchildren Gianni, Gia, Konnor, Anthony, Maggie, Malina, Benjamin, Abby, Lucy, Travis, Taylor, Evan, Jolie, Emme, Aleksander, and Adrian and many cousins and their families.

The family of Edwarda Kulesz created this Life Tributes page to make it easy to share your memories.

Send flowers to the Kulesz family.