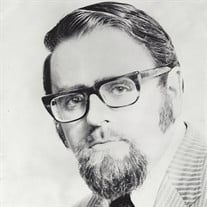 Donald Russell Minich, age 81, of Chicago and Army Veteran, passed away October 1, 2018. Beloved husband of Louise, nee Gburek for over 45 years; Loving father of Jim (Joyce) Minich, Justin Minich, and Sally (Jarrod) Arlich; Cherished grandfather of Matthew, Garrett, and John Minich and Jayden Arlich. Fond brother of C. Myron (Lydia) Minich, Bernice (The late Lyn) Snider, and Johanna (Jerry) Wells; Devoted uncle of many nieces and nephews. Donald Russell Minich was born on April 6, 1937, in Iola, Kansas, the second-youngest of 4 children born to Della Hickson and Cecil Minich. He is also survived by 5 cats, all of whom will dearly miss him. When he was 6 years old, his family moved to Santa Fe, New Mexico, where he grew up. In 1960, he graduated from McMurry College in Abilene, Texas, where he studied History and English, and, for a time, considered a career in the Methodist ministry. From 1962 to 1964, he served in the U.S. Army at Fort Ord, California, where he was awarded a Good Conduct Medal for “exemplary behavior, efficiency, and fidelity.” In 1963, he married Sheila Beaumont in an Episcopal ceremony in Berkeley. After teaching in the Tularosa and La Joya, New Mexico, public schools for 2 years, he attended the University of New Mexico in Albuquerque, teaching as a Graduate Assistant and receiving a master's degree in History in 1970 after completing his thesis, Opposition to Cardinal Wolsey, 1515-1527. By then, he was living with his wife and 3-year-old son Jim in Champaign, Illinois, where he was employed by the Illinois State Water Survey Library while working on a master's degree in Library Science, which he completed that same year. After library school, Don and his family headed to Southern California where, from 1970 to 1979, he worked as a Branch Librarian for the San Bernardino County Library system in Barstow and San Bernardino, and then, as a regional Supervising Librarian, receiving the National Association of Counties Award for his development of a volunteer program. In 1972, he became a single parent when his marriage ended, but in 1973, he married again, a union which lasted for the next 45 years. By then, he had converted to Catholicism. After California's Proposition 13 was passed, many civil service positions were eliminated, including Don's, so in 1979, he and his family moved to Chicago, his wife's hometown. While looking for permanent employment, Don worked as a substitute teacher in Chicago area schools. In early 1980, Don became a Social Insurance Representative for the Social Security Administration where he worked in the Supplemental Security Income section assisting disabled people in applying for benefits. For his efforts, in 1986, he received a Dedicated Service Award from the Chicago Area Black Lung Association and the Uptown Peoples Law Center. He retired in 2006. As a teacher, librarian, and civil servant, Don spent his life in service to his community. At various times, he was a member of the American Library Association, the California Library Association, and the St. Constance Parish School Board, and was a lector at the church for many years. He had a passion for social justice. In retirement, he did volunteer work for the progressive monthly magazine In These Times and the Greater Chicago Food Depository. He loved reading poetry, literary fiction, and European history, and had an uncanny memory for historical facts. He enjoyed writing letters to friends, and essays on topics that interested him. He loved singing in choral groups, where he was appreciated for his fine tenor voice. His sense of humor was legend, and he will long be remembered as the life of the party. Visitation Sunday, October 7, 2018 at Muzyka & Son Funeral Home, 5776 W. Lawrence Ave from 4:00 p.m. until 8:00 p.m. Funeral Monday, 9:30 a.m. from the funeral home to St. Constance Church for 10:00 a.m. Mass. Interment Maryhill Cemetery. In lieu of flowers; donations to North Lawndale College Prep would be greatly appreciated, www.nlcphs.org. For more information please call Muzyka & Son Funeral Home at 773-545-3800.

The family of Mr. Donald Russell Minich created this Life Tributes page to make it easy to share your memories.

Send flowers to the Minich family.