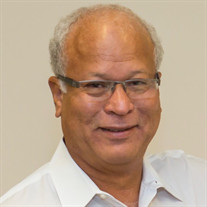 Carlos G. Clarke, 70, of Chicago, IL, passed away on February 22, 2022, after a long battle with heart failure. Dealing with the ailment since the 1990’s, he sadly lost that battle a couple of months after heart surgery. He passed with his family by his side, along with his devoted wife, oftentimes implementing physical therapy on her own under the guide of the caring staff of Northwestern Hospital. The son of the late Robert Douglas and Josefina Garcia Clarke, Carlos married Laurel P. Longsworth on Sept. 13, 1975 at St. Ignatius Church in Belize City. He was fond of his native Belize and would recount with joy his youth, different districts he lived, and trips to Texas to transport vehicles. A valiant competitor, Carlos was very active in sports and he played basketball for his high school team, the St. John’s College Piranhas. This work ethic carried over into his early career as a customs broker, and even into recreation as he was passionate about the things he loved, some of which included traveling, cross country trips, camping and more. After moving to Chicago, he worked as a Supervisor at Adams Elevator, a New Car Salesman at both Schaumburg and Midtown Toyota, then as a Customer Service Agent for United Airlines. Carlos had a small group of friends, of whom he was very loyal to his entire life. We thank these friends for also being lifelong friends of the family. A special thank you to the cardiology team at Northwestern for taking care of him all these years, and to the Cardiac ICU team who tried their best and did it with compassion. He is survived by his loving wife: Laurel P. Clarke; his children: Rivers (Tressa) Clarke, Robert (Tamrah) Clarke, Johanna (Ernest) Clarke-Marsalis, Ryann Clarke, Jason (Katie) Clarke; his grandchildren: Devin, Holly, Monroe, Hailey, Ledger; and his siblings: Jorge (Luz) Clarke, Emilio (Lizbeth) Clarke, Consuelo Clarke and many nephews and nieces. The Commemoration Service for Carlos will be held at 4:00 p.m.; the Visitation with family will be from 1:00 until 6:00pm. Both will be held on Saturday, March 5, 2022, at Muzyka and Son Funeral Home, 5776 W. Lawrence Ave, Chicago, IL 60630.

Carlos G. Clarke, 70, of Chicago, IL, passed away on February 22, 2022, after a long battle with heart failure. Dealing with the ailment since the 1990&#8217;s, he sadly lost that battle a couple of months after heart surgery. He passed with... View Obituary & Service Information

The family of Carlos G Clarke created this Life Tributes page to make it easy to share your memories.

Send flowers to the Clarke family.